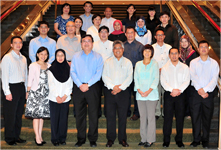 Infocomm Development Authority of Singapore (IDA) hosted the 12th Frequency Assignment Committee, Singapore, Malaysia and Brunei Darussalam (FACSMAB) Review meeting on 28th Sep 2011. The meeting was held at Fairmont Singapore Hotel. Among the many topics that will be discussed will be key issues facing the three member countries like 4G/Long

Term Evolution (LTE) spectrum sharing, and Digital Dividend (DD) 700MHz plans. The meeting was chaired by the Director General of Telecom & Post of IDA, Mr. Leong Keng Thai. The Brunei delegation was led by Hj Yahkup Hj Menudin, Chief Executive of AITI and the Malaysia delegation was led by Ms. Faizah Zainal Abidin on behalf of the Chairman of MCMC.

The Frequency Assignment Committee of Singapore, Malaysia and Brunei Darussalam (FACSMAB) has been established since 1948. The role of FACSMAB is to ensure harmonized use of frequency spectrum at the Brunei, Malaysia and Singapore common border areas in conformance to the Constitution and Convention of International Telecommunication Union (ITU) and its Radio Regulation.

The use of spectrum along common border areas of FACSMAB member countries is coordinated at FACSMAB monthly meeting. Several methods have been adopted to facilitate the coordination process such as band sharing (first come first serve basis) and band partitioning (radio frequency channel/block allotment plan).

After 63 years of its existence, FACSMAB has reached many agreements on band partitioning and band sharing. These agreements have proven to work effectively as indicated by the minimum occurrence of radiofrequency interference along the common border areas.

LTE can be deployed in both new spectrum and existing (re-farmed) spectrum. Most mobile operators are inclined to utilize 2.5/2.6 GHz band and 700 MHz band for LTE as their preferred band for the technology evolution path to 4G. Deployment of LTE in 1800 MHz band is another promising option in several markets. It contains the widest bandwidth allocation of spectrum mobile operators could have (2 x 75 MHz).

The main motivation to deploy LTE in 1800 MHz is that the coverage properties as well as in-building penetration are substantially better than LTE operating in 2.6 GHz band. However, the availability of LTE devices is very limited for immediate launch.

The 1800 MHz band for IMT system, identified by FACSMAB members, is currently occupied by GSM systems. The 1800 MHz frequency arrangement adopted by Singapore, Malaysia and Brunei is based on ITU-R Recommendation M.1036-3.

Adjacent Channel Interference of the S-band Radar with the Wireless Broadband (WBA) Services in 2.5 GHz Band

CEPT has recommended a band plan for FDD and TDD technologies in the 2.5 GHz for the wireless broadband technology deployment. The band plan is arranged as 2500 – 2570 MHz (uplink) paired with 2620 – 2690 MHz (downlink), with an unpaired band allocation at 2570 – 2620 MHz. This band plan is adopted by many countries including FACSMAB members. It is widely expected that Long Term Evolution (LTE) will be the technology in frequency division duplex mode in the paired spectrum and WiMAX or TD-LTE would be deployed in the unpaired spectrum.<

OFCOM had identified the potential to designate part of the 2.5 GHz band spectrum for shared low-power use where access would involve multiple licensees operating in a concurrent, non-exclusive fashion across the same spectrum. As part of OFCOM’s efforts to investigate the technical issues associated with low-power shared access in the 2.5 GHz spectrum, the studies on the potential adjacent channel interference by the S-band radar on 2.5 GHz FDD LTE band was conducted and the findings from the study had highlighted that there would be potential adjacent channel interference issues between 2.5 GHz FDD services with the S-band Radar services.

With reference to the ITU recommendation, the S-band radar (particularly in the range 2.7 to 3.1 GHz) is predominantly used for aeronautical & maritime navigational, radiolocation and meteorological purposes.

With FACSMAB countries adopting full band sharing in the 2.5 GHz band, it is crucial to understand the likely impact if the interference issues do exist and if there is possible mitigation measure that members could put in place with the spectrum framework when the 2.5GHz band is assign for use in near future.