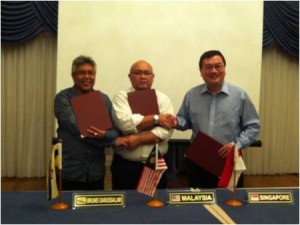 The 13th FACSMAB Review Meeting was hosted by Malaysia on 25th April 2012 at the Royale Chulan Hotel, Kuala Lumpur. The meeting was chaired by Dato’ Mohamed Sharil Tarmizi, the Chairman of MCMC and was attended by Hj Yahkup Hj Menudin, Chief Executive of AITI and Mr Leong Keng Thai, Deputy Chief Executive &Director-General of IDA. In the meeting, MCMC, AITI and IDA signed the Record of Intent (ROI) on the Sub-band plan of 2500 MHz 2690 MHz frequency band to harmonise radio frequency spectrum usage for Mobile Wireless Broadband Access Services.

Harmonization of Spectrum Arrangements in the 800 and 900 MHz bands for IMT Systems Implementation The 698-960 MHz band is one of the bands identified by WRC for IMT system. Following the identification of the IMT bands, a study was conducted by ITU-R WP5D which resulted in several frequency arrangements being recommended to facilitate the implementation of IMT in these bands.

The frequency arrangements are recommended on the basis of enabling the most effective and efficient use of the spectrum to deliver IMT services while minimizing the impact on other radio-communication systems or services within and adjacent to the bands identified for IMT.

Many countries are currently studying the re-allocation of the 800 and 900 MHz bands to facilitate the growth of IMT systems in the industry. Hence, it is timely for FACSMAB to study and harmonise these band plans to optimize the spectrum utilisation and efficiency especially along the FACSMAB common border areas.

Article 5 of the Radio Regulations shows the Table of Frequency Allocations for different radio services in each respective Region.

This Article also includes frequency allocations by footnotes to satisfy the different needs of some countries. These footnotes are developed based on contributions from Member States and decisions made at WRCs.

Global mobile data traffic grew three times in 2010 compared to 2009 due to the accelerated adoption of smart phones and tablets. This has brought about a paradigm shift in mobile communications which has seen an evolution from mainly voice communication and text messaging to high data demand services such as internet surfing, online gaming, online music or video streaming and social networking.

Furthermore, in the ITU report M.2072, it was predicted that the total worldwide mobile data traffic would grow from around 450 Petabytes in 2008 to around 1,000 Petabytesin 2015 with a CAGR of 12%