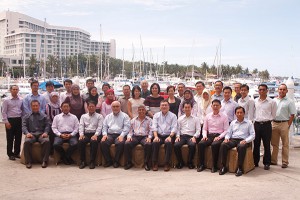 In accommodating the increasing demand of mobile broadband growth, several spectrum bands have been identified for IMT. One area of interest is the frequency bands below 1 GHz as these bands provide better coverage and indoor penetration due to its propagation characteristics.

FACSMAB plans to study the possible band plan options focusing on the bands identified for IMT systems below 1 GHz and agree on a harmonized band plan for the deployment of IMT systems.

FACSMAB has decided to conduct studies through appropriate methods to define coordination parameters for broadcasting services.

As one of many efforts to address demand from increasing mobile data traffic, cellular operators are beginning to deploy heterogeneous mobile technologies into the same or new spectrum bands utilised by existing systems. This could introduce a new degree of complication and level of involvement in the border co-ordination efforts among mobile operators.

Similarly, it is foreseeable that the existing border co-ordination parameters and methodologies adopted among FACSMAB members may no longer be sufficient nor will it remain as relevant in the emerging future.

FACSMAB, therefore, decided to study, validate and develop a common set of agreed co-ordination parameters to address potential interference issues of such deployments among FACSMAB countries. This would also ensure better harmonised use of different mobile technologies at common border areas.