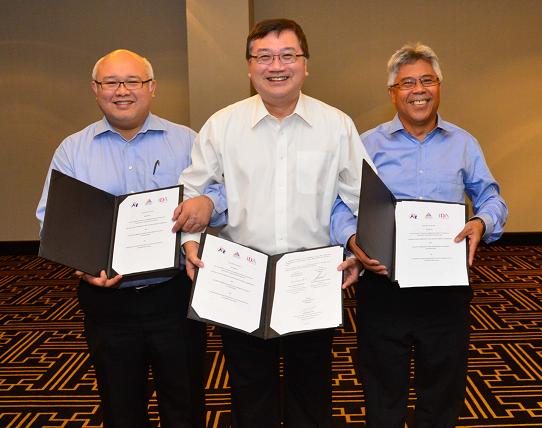 The 15th FACSMAB Review Meeting was hosted by Singapore on 19th December 2013 at the Concorde Hotel Singapore. The meeting was chaired by Mr Leong Keng Thai, Deputy Chief Executive & Director-General of IDA and was attended by Hj Yahkup Hj Menudin, Chief Executive of AITI and Dato’ Mohamed Sharil Tarmizi, Chairman of MCMC.

In the meeting, MCMC, IDA and AITI signed the Record of Intent (ROI) on the expansion of radio frequency in the 700 MHz digital dividend spectrum.

There has been a growing demand by the government and private sectors for more spectrum in private networks and telemetry applications. This has resulted in an increasing trend in the number of frequency registrations in the VHF (138-174 MHz) bands.

The adoption of full band sharing in the VHF band helps to maximise the usage of the spectrum. It allows each member country to have more channels to cater for higher demand from the industry, as well as, expediting the frequency coordination process which will lead to fast roll out of networks.

FACSMAB plans to study the feasibility of full band sharing in this band and consider common coordination parameters to mitigate signal spillage and interference issue between neighbouring countries.

In 2010, the Australian Communications and Media Authority reviewed the 2.5 GHz band to migrate and support the introduction of Television Outside Broadcast (TVOB) as a primary service in the 1980-2110 MHz and 2170-2300 MHz bands. Future use of these bands is under consideration and may include existing services and other new services such as mobile broadband and TVOB services.

With the convergence of several service offerings (internet, broadcasting, and other multimedia based service offerings) on mobile devices, users are downloading much more data than they upload.

The data based traffic over mobile broadband networks is predicted to increase rapidly over the coming years driven by mobile multimedia usage with a particular evolution towards asymmetrical traffic and therefore an increasing demand for downlink capacity. The Mobile Supplemental Down-Link (Mobile SDL) using the L-band, 1452-1492 MHz, provides additional downlink capacity and would therefore help meet the growing demand for downlink traffic.

With that, FACSMAB recommends to study the co-existence of Mobile SDL with other services/systems in adjacent bands and the available band plans for International Mobile Telecommunications based services in order to harmonised use of the frequency band 1452-1492 MHz.