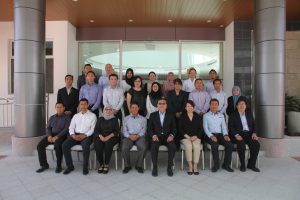 During the meeting, three new work items have been confirmed. They are (i) Usage in VHF Maritime Mobile Band (Appendix 18); (ii) Channelling Plan for Fixed Services in High Frequency Bands; and (iii) A harmonised band plan for ITS/DSRC in 5.9 GHz band.

Frequency channels may be selected for high-speed data and facsimile transmissions as well as direct-printing telegraphy and data transmission. In addition, the band is applicable for radiocommunications at sea and inland waterways, noting that the use of the channels which are shared with public correspondence and identified for a specific use, shall be subject to prior agreement between interested and affected administrations.

With the growing demand in this VHF band for radiocommunication network applications, FACSMAB plans to study the possibility of adopting full band sharing in the 156 – 162 MHz band including the required coordination mitigation parameters and optimisation of the spectrum at common border areas.

With the rapid development of wireless system and technology, there is a need for service providers to cater much higher capacity demands which result from the increase of data usage services such as video streaming and cloud sharing, compared to the preceding years where it only offers traditional telephony, short message and basic data services.

There are increasing demands for high capacity backhaul over short distance by the service providers. New channelling plan in the High Frequency Bands (i.e. 18 to 62 GHz) is required to accommodate such requirements. Additionally, there are few licensing methods which can be considered individually or combined such as license exempt, block assignment, light touch licensing and individual license.

FACSMAB recommends to study the possible channelling plans (while noting the development of IMT in WRC-19) and the appropriate coordination distance for the Fixed Service application along common border, as well as, the efficient licensing approach and best practices in other countries.

A harmonised band plan for ITS/DSRC in 5.9 GHz band

The technologies rely on wireless communications including Dedicated Short Range Communications (“DSRC”) to enable the transmission of information between (i) vehicles and road-side infrastructure; and (ii) among vehicles. DSRC in the 5.9 GHz band will be an enabler for future ITS applications and system deployments. In Singapore, there is an increasing feedback from the local industry indicating interest in bringing ITS commercial equipment that operates in the 5.9 GHz band into the country.

Back in 2008, IDA has identified the 5.875 – 5.925 GHz band for use by ITS applications. To facilitate the introduction of ITS among FACSMAB countries, FACSMAB has decided to study and explore the feasibility of allocating spectrum in the 5.850 – 5.925 GHz bands for ITS to allow cross-border mobility of vehicles, including the appropriate technical standards as well as monitoring the international, regional and ITU’s activities on the developments of ITS bands harmonization in the 5.9 GHz band.